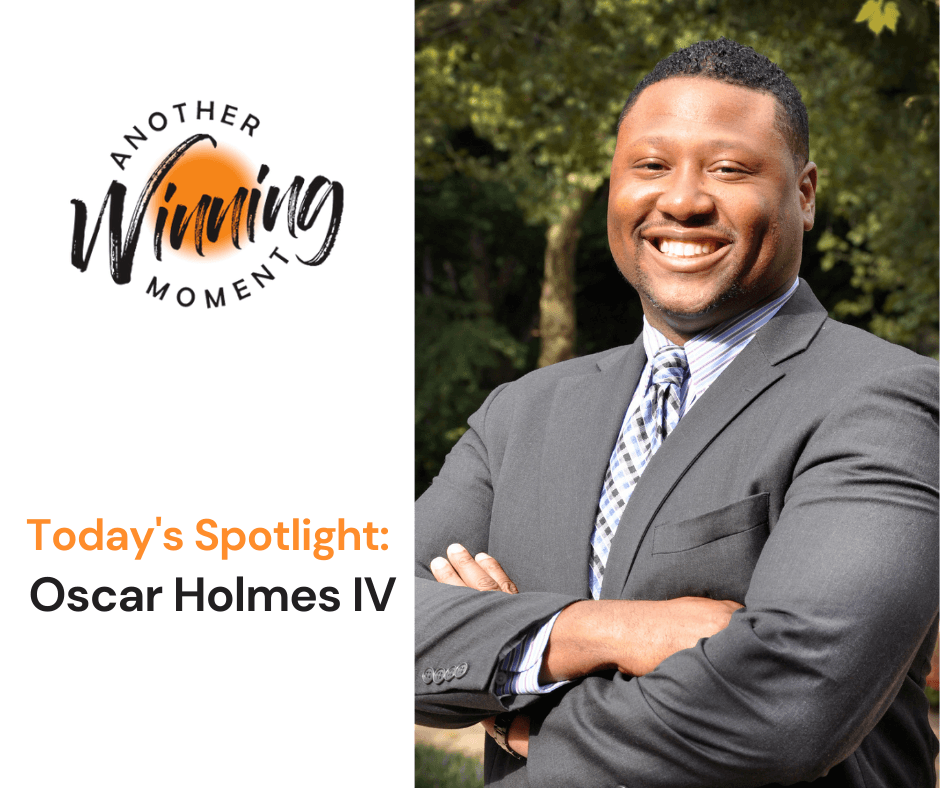 Posted at 09:30h in Uncategorized by lashanasorrell 0 Comments
I want to introduce you to the November Another Winning Moment Spotlight – Oscar Holmes IV. His story of trials, tribulations and triumph is a true testament to the adage – “The world waits to reward anyone who dares to insist upon being all they can be.”…

Oscar grew up in a rural town outside of Virginia. At an early age, he tested into the gifted program. Oscar attributes the rigorous nature of this program to help him to prepare for a life of challenging work and thriving in a healthy competitive environment. Even though his parents never attended college, education was very important in his household and school became his social outlet.

One of his first life challenges came at a young age. At only 14 years old, Oscar was diagnosed with stage IV Hodgkin’s disease, a cancer of the lymph nodes. This began a years-long battle and eventual recovery, but it taught Oscar valuable lessons of community and gave him a unique outlook on life. Oscar’s community was vital to his success and recovery. His family didn’t have adequate health insurance coverage for him so his community hosted fundraisers to help cover his medical expenses. Through much determination and effort, Oscar graduated on time, with college credits having matriculated concurrently at the Governor’s School, and as the Valedictorian of his high school. After surviving this health crisis he was in a rush to experience life because he knew firsthand that life wasn’t promised.

Though he could have gone to almost any college of his choosing, Oscar applied to Virginia Commonwealth University (VCU), the very same hospital that saved his life. It was the only school he applied to. In an effort to catch up on what felt like time lost during his high school career, Oscar graduated college in 2.5 years. Committed to his community, Oscar went back to his high school where he worked for two years as a Spanish language teacher. He later worked for two other public school districts while pursuing his master’s degree from the University of Richmond. 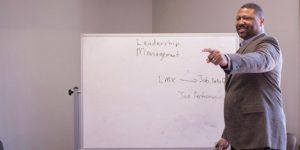 Oscar discovered a love for Industrial Organizational Psychology and learned that Organizational Behavior was a similar discipline, but in the business school. He eventually applied to 12 Organizational Behavior Ph.D. programs and was subsequently rejected from all of them. After attending the Ph.D. Project Conference, which is an annual conference geared towards increasing the diversity in Corporate America by increasing underrepresented racioethnic business school professors in higher education, Oscar learned how to improve his application. Not being deterred by the previous rejections, Oscar applied to VCU and got in. However, what was once a safe haven during his high school and college career, quickly turned into an uncomfortable and unwelcomed environment. After two years of lack of adequate support, unconscious bias, and racism, Oscar took an action that would ultimately alter the trajectory of his career for the better. Although unconventional to switch Ph.D. programs midway through, he applied to a program he thought would be better suited for and got into The University of Alabama. Oscar says this was the best thing that could have happened to him. There he found a community of professors and mentors who were committed to helping him maximize his full potential. One coordinator did just that when he talked Oscar out of what would have been a devastating career mistake, graduating early during his fourth-year of his Ph.D. studies to start earning a professor’s salary.

Oscar went on to graduate with his Ph.D. in 2013 and joined Rutgers School of Business-Camden, his first placement, where he became the first African American to earn tenure at the School of Business in 2019. Oscar is currently the Associate Dean of Undergraduate Programs, an Associate Professor of Management and the Rutgers University Student Executive (RUSE) Director and has taught executive education, graduate, and undergraduate courses in Leadership, Organizational Behavior, Conflict Resolution and Negotiation, and Crisis Management.  His research examines how leaders can maximize productivity and well-being through fostering more inclusive environments and has been published in several top-tier management journals and books. In 2020 Oscar became the first African American to have a top administrative role in the school of business. 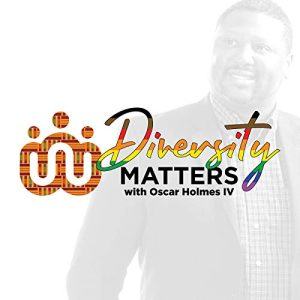 Oscar has built a beautiful life of personal and professional fulfillment, success, and accolades. He established  WHConsulting firm established in 2019 and has recently produced his own podcast – Diversity Matters with Oscar Holmes IV – that explores all things diversity, equity, and inclusion (DEI).

He says God, family (first and foremost), and mentorship are what allowed him to have a lifetime of winning moments. There have been so many opportunities that only God alone could have provided. Oscar is thankful for the immeasurable emotional and financial support his family has provided over his lifetime, and particularly thankful for the love and support he receives from his husband.